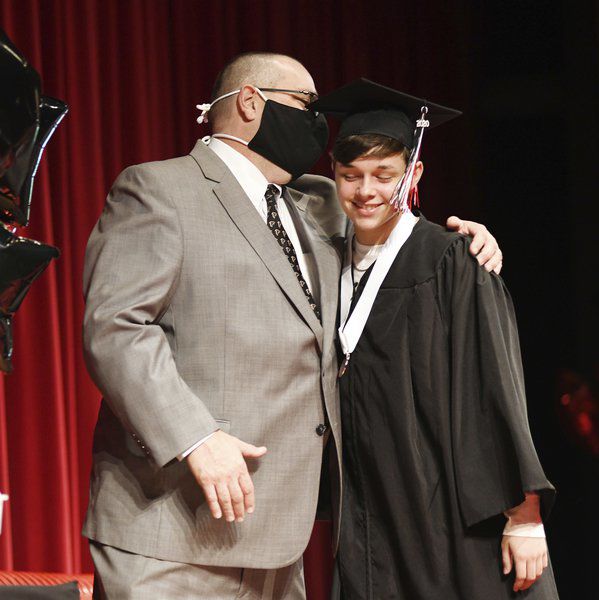 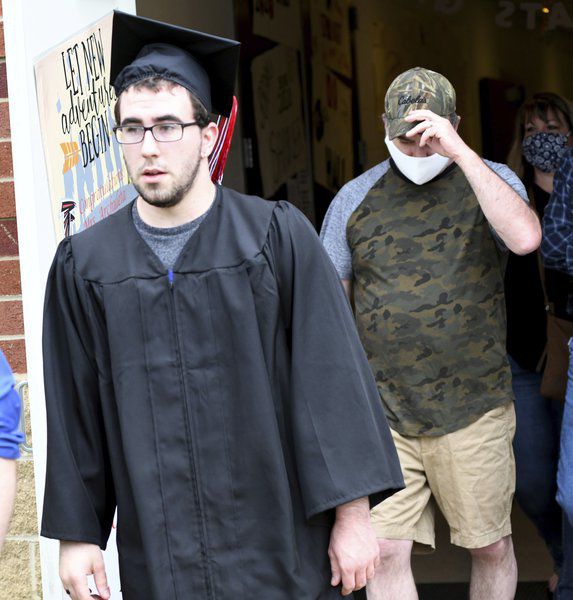 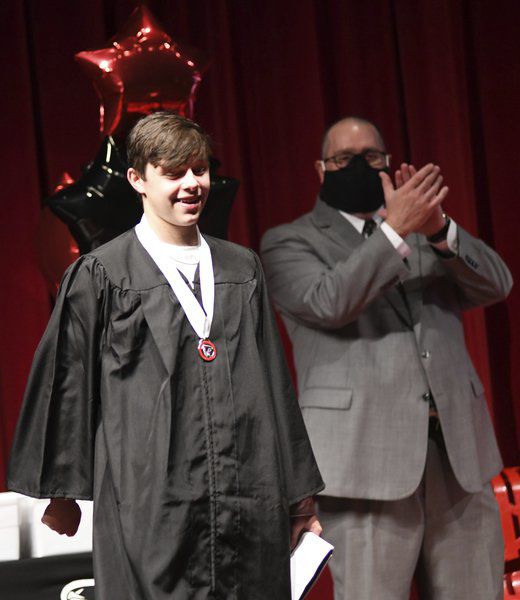 Tyler Alexander, left, has his picture taken during Jefferson High School graduation on Friday afternoon in Jefferson. Each student was able to walk across the stage by him or self with a small group of family members watching.

Tyler Alexander, left, has his picture taken during Jefferson High School graduation on Friday afternoon in Jefferson. Each student was able to walk across the stage by him or self with a small group of family members watching.

JEFFERSON — The rain slowly fell on umbrellas held by the families of Jefferson Area High School graduates on Friday afternoon as students made their way, one-by-one, to the school’s auditorium.

Each student was able to bring a group of family members from their vehicle, register at a table outside the auditorium doors then walk across the stage to receive their diploma.

“I think they [administrators and teachers] did a great job. You have to remember my son [Johnny Montanaro] is a 2020 graduate. So I’m feeling the pain too,” said Jefferson Area Local Schools Superintedent J.C. Montanaro.

He said the finality of the coronavirus and what it took from area seniors hit him when talking to his son.

Montanaro said his son said “I would have just liked to know it was my last day of school,” he said.

A videographer, a photographer and administrator kept the process flowing as the students walked across the stage, posed briefly for pictures with family, then exited a second door and out into their new reality.

Students were appreciative of the school’s efforts, but they knew it wasn’t quite the same experience with full speeches and hundreds of people in the gymnasium.

“It was all right. It is what it is,” said Tyler Alexander, who plans to attend Kent State Ashtabula to study physical therapy.

Principal Jeremy Huber was also involved in the process on Friday afternoon and was happy to see the students.

“It is nice to see everyone,” he said.

Jefferson Police Chief David Wassie greeted all the students as they left the ceremony.

“It is not how I envisioned what may be my last graduation,” he said.

Graduate Braxton Babic may have summed up the graduates’ feelings best when he said, “I wish it was like it was supposed to be. It just wasn’t the same,” he said.

Brandon Baird said it was pretty exciting and he enjoyed the parade last weekend as well.

“It was cool. It was kind of a best case scenario [under the circumstances],” said graduate Rylie Barnes.

Ezekiel Brake said he it was cool that the school was able to do something for the graduates.

Montanaro said the school will be posting a video of the students walking across the stage and speeches from administration and students.

“We will be posting it on YouTube,” he said.