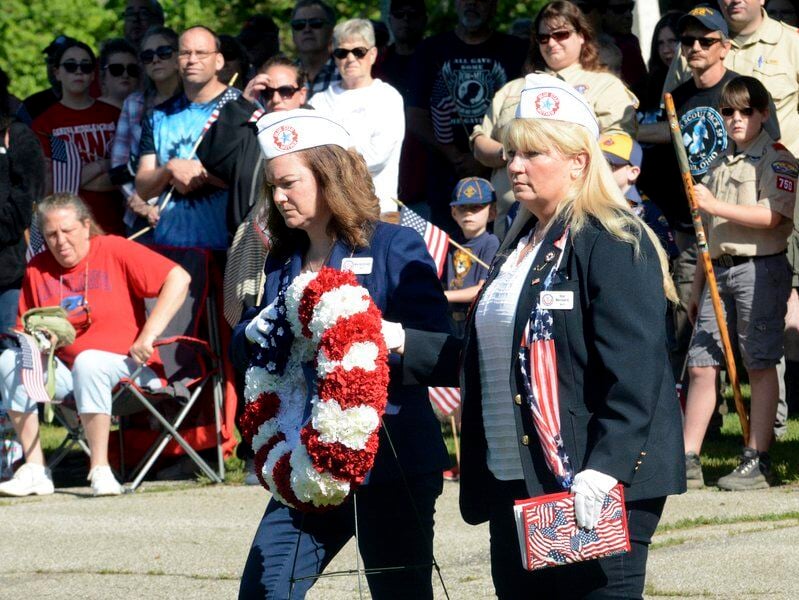 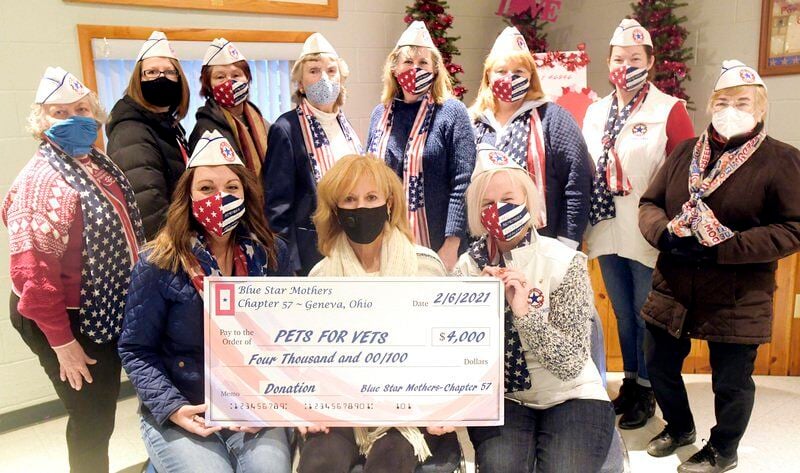 GENEVA — Finding support and reaching out to members of the military is the dual purpose of the Blue Star Mothers of America.

The Ashtabula County chapter of the Blue Star Mothers is the oldest chapter in the state of Ohio, said chapter president Angie Gruber. She said she got involved when her son Adam was in the Ohio Air National Guard and continued as her son Benjamin joined the military.

On Saturday, club members gathered to provide the Cleveland chapter of Pets for Vets with a $4,000 check to help the organization provide companion dogs for veterans. Joan Tiefel, executive director of the Pets for Vets organization in Cleveland said she was appreciative of the donation.

Gruber said Lynn Merrick spearheaded the project and the community was very generous in supporting a variety of fundraisers in the midst of the COVID-19 pandemic.

“It is not a service dog it is a companion dog. It is for people who need someone to love them,” Tiefel said.

Tiefel said the training is important so the dog “is ready to go” for the veteran who may be struggling with post traumatic stress syndrome or other issues.

Blue Star Mothers was founded in the 1940s to provide support for mothers of military members and has been providing many services ever since.

While most of the 19 members of the Ashtabula County chapter, based at the Geneva Veterans of Foreign Wars, are or have been mothers of children in the military, some are not. Gruber said the organization is not just for women, as two men are presently members of the local chapter.

“We have two fathers and we love them,” she said.

“I am an associate member, but I didn’t have any children in the service,” said Catherine Schmidt. She said her family had careers that supported the military, but were never in any of the branches.

“It’s not just to help members of the military, but the mothers themselves. They support each other,” she said.

Amy Hutchinson, first vice president, said she has been a member of the organization for seven years. She said she joined after her son enlisted in the Air Force eight years ago.

Hutchinson came to the experience without any personal family history of military involvement.

“From day one, it helped me,” she said. One of the biggest challenges was coming to grips with the fact her connection with her son was no longer an easy process. “He belonged to them, not me,” she said of the new relationship that now included the military.

In addition to her role in the county chapter, Hutchinson now has an office within the statewide Blue Star Mother’s program.

Merrick said supporting the dog program for veterans is something she has wanted to do for awhile. She said the effects of PTSD have to be so traumatic.

During the pandemic the organization has been unable to do a lot of meetings with veterans at hospitals in Cleveland or Erie or bring them to Ashtabula County for visits.

The dog project helped fill that void this past year.

Gruber said the organization provided 130 gifts to patients at the Cleveland Veterans’ Administration hospital and sent 60 “troop boxes” to soldiers stationed in Korea.

The one-on-one relationships provided during once-a-month meetings also is therapeutic for the mothers, fathers, uncles, nieces and nephews of those in the military.

“The family just needs to be uplifted so they can care for the person in the military,” Gruber said.

The organization is presently holding Zoom meetings the third Monday of every month at 6 p.m. Gruber said they hope to be able to meet face-to-face soon and anyone interested in learning more about the organization can get more information on the organization’s Facebook page.