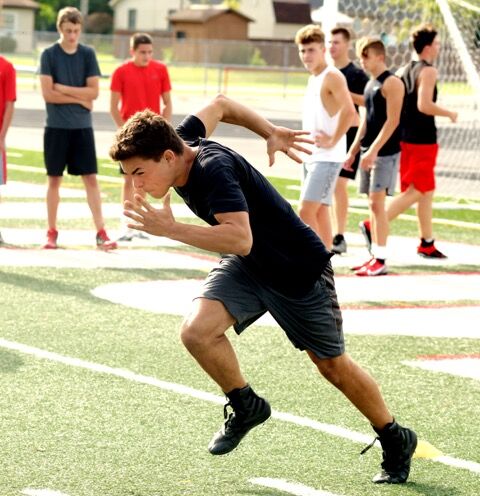 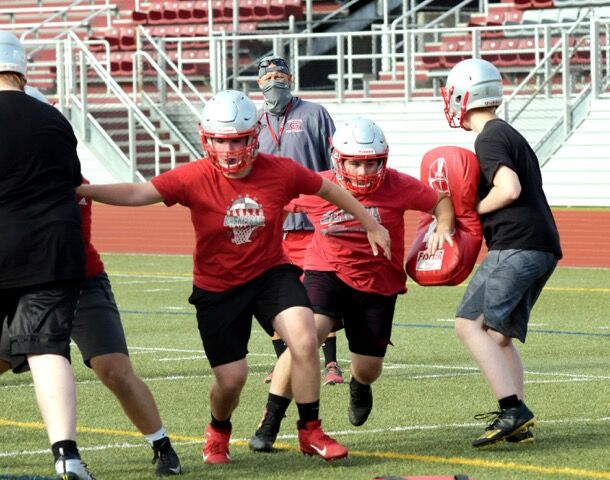 Geneva football coach Chip Sorber, back with mask, watches a lineman drill on Saturday during the first day of official practice at Spire Institute.

Geneva football coach Chip Sorber, back with mask, watches a lineman drill on Saturday during the first day of official practice at Spire Institute.

The first steps of a walk into the unknown happened on Saturday as some area high school athletic teams held their first day of fall practice.

The spirit of area football practices seemed to be "business as usual" but there were questions bubbling under the surface.

"They [the players] are feeling anxious for sure. I am getting 100 texts a day," said Geneva High School football coach Chip Sorber.

As the players moved from drill to drill Sorber reminded them they were lucky to be able to practice.

"At the end of the day we had another day of football," Sorber said.

Sorber has 43 players in grades 10-12 and another 21 freshmen. He said they have been working hard since January it is great to have a first day of official practice.

Sorber also reminded players to make sure they were "social distancing" while watching other players during drills.

At Jefferson Area High School the Falcons were working on a lot of physical fitness challenges and the sounds of rock music bellowed from the weight room, where athletes were working to prepare for a season they hope occurs.

"So far so good," as he started players on a 40-yard dash while other players were testing their vertical leap ability about 30 yards away.

Rankin said his players hadn't talked too much about the possibility of the season being canceled or delayed, due to the coronavirus pandemic.

"We are just showing up and working. We control what we can control," he said.

Rankin said he had 43 players at practice on Saturday morning.

The Pymatuning Valley Lakers are coming off a league championship season and are a veteran team leading into the fall season. Coach Neal Croston said he has eleven seniors and eleven juniors and total of more than 30 players which is up from the last several years.

"If they (the players)a re wondering about the (possibility of canceling the season) they don't talk about it," he said.

Croston said the players seem to feel good about being back on the field after so many months in "lockdown".

Croston said the team took a week off before opening practice on Saturday morning.

The locker room was sanitized completely and the players and coaches were prepared for the season to come.

"If we do have a season there will be some challenges," he said.

The young people, however, in some ways are leading the way, Croston said.

"The kids seem to adjust better than the adults," he said.

Croston said he has seven linemen between 270 and 300 pounds. He said his team has a lot of motivated young men who are also good students.

"They will be heartbroken [if the season is canceled]," he said.