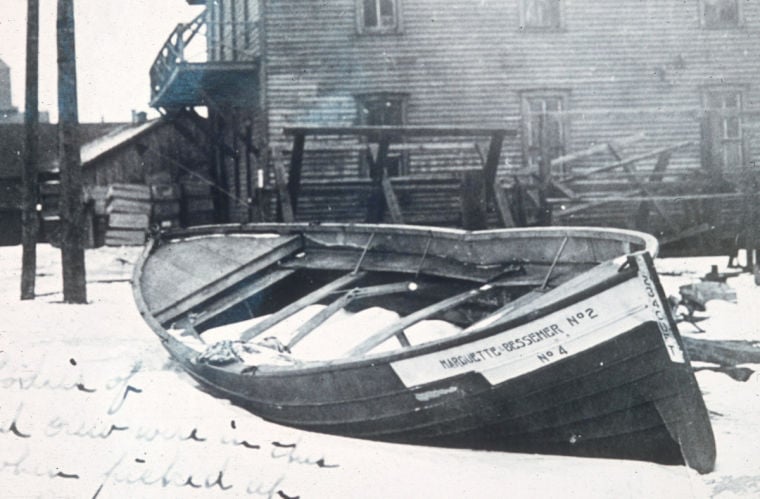 THE ONLY lifeboat from the Marquette & Bessemer No. 2 to be found with epople aboard was towed into Erie, Pa., five days after the car ferry left Conneaut on its final trip. Nine frozen bodies were found in the yawl. 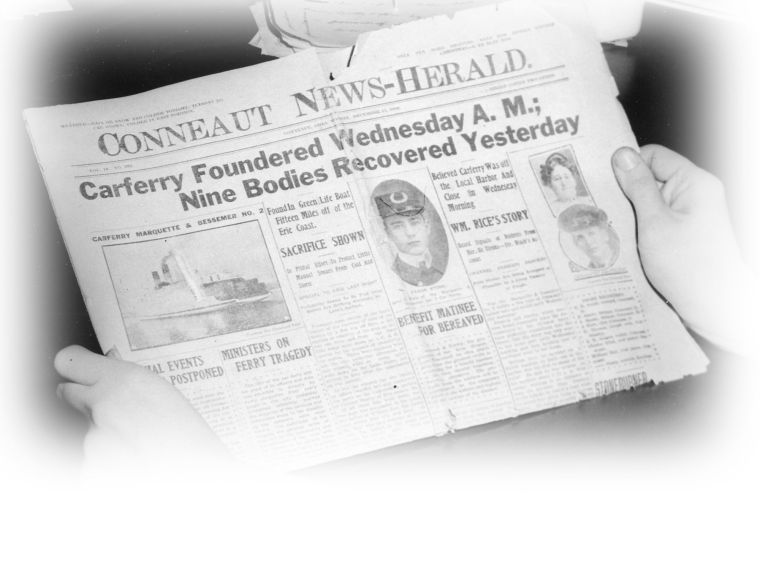 The CAR ferry's sinking hit Conneaut especially hard as man of the crew members had homes and families in the city.

THE ONLY lifeboat from the Marquette & Bessemer No. 2 to be found with epople aboard was towed into Erie, Pa., five days after the car ferry left Conneaut on its final trip. Nine frozen bodies were found in the yawl.

The CAR ferry's sinking hit Conneaut especially hard as man of the crew members had homes and families in the city.

Sarah Clancy awoke shivering and crying out to the voice of her brother, John, a sailor on the Marquette & Bessemer No. 2 out of Conneaut.

The car ferry was caught in a terrible storm on Lake Erie and was going down. John kept calling to Sarah, who lived in Erie, Pa., and there was nothing she could do but cry and tremble while warm and dry under the covers of her bed.

Sarah’s nightmare occurred three days before the vessel made her last departure from Conneaut for Port Stanley, Ontario. When the car ferry steamed out of Conneaut Harbor on Dec. 7, 1909, 30 railroad cars, most of them loaded with coal, were locked to the rails in the hold. There was no stern gate across that hold, however, despite her sister ship, the Marquette & Bessemer No. 1, having one, and the warnings of the No. 2’s captain, Robert R. McLeod, about the necessity of a gate. The owner promised to have one installed, at the end of the shipping season.

Winds gusted to 70 mph and snow pelted the pilothouse windows as Capt. Robert McLedo took the four-year-old ship into a graybeared hell. With the temperature falling steadily from the early-morning high of 40 degress, McLeod and his crew, many of them from Conneaut, knew they were in for long day and night.

In the 24 hours after the No. 2 departed from Conneaut, there would be numerous reports from people both onshore and in vessels who claimed they caught a glimpse of the ship bobbing in the graybeards or heard its distress signal piercing the wintry howls.

A tug boat captain from Conneaut, struggling to make it back to port, claimed to pass the ferry in the open lake in the early afternoon.  A Port Stanley man claimed to have seen the No. 2 approach the Ontariol-side harbor, but turn away because of the dangerous conditions. The sighting was about seven hours after the No. 2 left Conneaut. Seven miles east of Port Stanley, a man was awakened by a steamer whistle that seemed so close, he thought the vessel was onshore. It was 5 a.m.

Contradicting that account are several from the south shore, where a worker at Conneaut’s dock said he heard the No. 2’s distress whistle at 1 a.m. the following day.

“She kept sounding these four quick blasts,” said William Rice, a Hulett unloader operator who was outside his cab when he heard the whistle. “And then she blew five times, which I thought was the at-anchor signal. Pretty soon, as if the anchor chains had parted, she started the distress signal again. I recognized it as the car-ferry’s whistle, but in about 15 minutes, all the blowing stopped.”

The captain of the steamer Black, which rode out the storm just outside the Conneaut breakwater, reported seeing the car ferry’s silhouette steaming eastward early that same morning.

The sightings suggested that McLeod had turned the vessel toward Conneaut in hopes of making harbor, but found the conditions there no better than at Port Stanley. And so he headed toward Erie.

Testimony from a young lady who lived a couple of miles to the east of the state line corroborated the captain’s observation. In a note from Mrs. Gladys Eagley to Donna Rodebaugh, Capt. McLeod’s niece, Eagley wrote in 1986 that “On the night the carferry went down we heard the whistle it keep blowing and Dad says that boat is having trouble. We did not know then until we heard the news. But that whistle keep blowing until it went under water. I just had to write and tell you, I am 93 years old and I can still hear that whistle.”

Farther east, at Fairview, Pa., a farmer’s son reported hearing a distress signal as he did his chores at 7 p.m. The sound stopped, but was heard again shortly after midnight.

There was, among the families of the past-due sailors and the owners of the vessel, the hope that McLeod had found respite from the storm behind Long Point, where at least 30 other vessels rode out the gale. That was not the case, however.

A debris field was noted by the steamer William B. Davoc as it traveled westbound past Long Point on Dec. 10, 72 hours after the No. 2 sailed out of Conneaut. A wireless message was sent from the ship to Cleveland reporting the debris, which included a green lifeboat and woodwork painted green, the No. 2’s predominant superstructure color. The debris was just west of the point

The crew of the Commodore Perry, a fishing tug out of Erie, Pa., was the first to provide evidence of the catastrophe. Around noon on Dec. 12, the Perry encountered the No. 2’s fourth lifeboat (the yawls were numbered and, if protocol would have been followed, launched in numerical order.

A “gruesome discovery” declared the headline on “The Erie Times” story of the discovery. There were nine frozen bodies in the half-sunken yawl.

“From the appearance of the yawl boat it is evident the men left their ship in a mad hurry probably to escape being engulfed as she foundered, and had been tossed in the icy blizzard until they were frozen to death,” the newspaper reported. “For the rest of the crew and passengers missing since Tuesday, all hope has been abandonned.”

There were at least two mysteries aboard the yawl. First was the presence of clothing without a body.

“It is thought there had been 10 in the boat, but one had become mad at the horror of it and snatched off his clothes, and bared his shivering body to the killing gale, and then leaped into the black water, his clothes were found where he left them, wet through and frozen fast to one end of the boat,” the newspaper reported.

It later came to light that, despite all but one of the men being dressed in “only overalls and jumpers,” the steward had taken the time to bring two of his long galley knives and a meat cleaver aboard the lifeboat.

Over the years, much speculation has been made of this, especially because only one of the four lifeboats appeared to have been launched. Was there a fight for the single lifeboat, with the steward gaining the upper hand via his knives? This scenario was given even more credence when the captain’s body, which did not come ashore until Oct. 6, 1910, was found to have several severe slash wounds. Was he among those atacked by the steward?

David Frew, author of “Long Gone,” a book about the M&B No. 2 disaster, feels there is a more pragmatic explanation — knives were essential to a steward’s livelihood. They were quite portable and there was no sense in leaving them behind. Further, given Capt. McLeod’s spotless reputation as a gentleman and captain, it is very unlikely he would have challenged the steward for a spot on the yawl.

The biggest mystery about the No. 2 is its final resting place. The hull has never been located, but the theories abound.

Frew’s hunch is it will be found off Port Stanley, near the epicenter of the debris field that the Davoc encountered after the storm. Dwight Boyer, in his book “Ghost Ships of the Great Lakes,” tells of the No. 2’s replacement, of the same name, scraping against a large, uncharted underwater obstruction as it made the trip from Conneaut to Port Stanley. The car ferry’s predecessor was a prime suspect.

That theory, however, denies the southshore sightings and stories of the whistle blasts. Boyer writes of an underwater obstruction between Erie and Conneaut that could be No. 2. In 1932 the package freighter Jack, struck wreckage some 35 miles southwest of Long Point, Ontario. The obstruction broke the freighter’s propeller and twisted her rudder.

Capt. Hugh McLeod, brother of Robert, insisted the wreck was somewhere off Long Point, Frew’s position on the matter. In August 1963, a fishing boat captain reported losing a $600 trawl on a wreck in 145 feet of water near Long Point. A depth finder on the fishing boat indicated that the object jutted up about 45 feet from the bottom.

Of course interest in wreck’s whereabouts is heightened by the story of Albert J. Weiss, treasurer of the Keystone Fish Company of Erie, Pa., who boarded the vessel at the last minute. The passenger was said to be traveling with enough cash to purchase Candadian fishing firm. The amount of cash has been stated as between $30,000 and $50,000. The money, conceivably, would still be locked up in the car ferry’s safe, had standard protocol been followed by the purser.

Less of a mystery is the cause of the loss. The lack of a stern gate seems most likely, especially in light of the huge seas that would have swamped the hold, put out the boiler fires and most likely broke the rail cars free, dooming the ferry.

The disaster put a huge damper on Christmas in Conneaut that year. City business was put on hold as the town went into mourning for local men lost in the disaster. Five of the nine men aboard the lifeboat were from Conneaut: Manuel Souars, the porter; Joe Shank, fireman; George Smith, steward; William Ray, coalpasser; and Thomas Steele, fireman.

Perhaps owing to the nature of the disaster and time of year, the owner of the Marquette & Bessemer Dock and Navigation Company generous provided a month’s salary to the surviving relatives of each crew member and assumed the funeral expenses of any recovered bodies (only 14 bodies; the other 20, including Weiss’, were buried with the ferry).

Many of the men who died were the breadwinners of their famlies. One widow had eight children; many of the women found it impossible to put food on the table or coal in the stove once the benefit was exhausted.

A relief fund was established by the Conneaut News Herald and, by Dec. 24, the community had raised $1, 018, not a great deal of money considering the relative prosperity of the town at that time and the large number of affected residents.

At last two lessons were garnered from the incident: the No. 2’s replacement had stern gates, and it also had wireless communication equipment.

Nearly 50 years later, as the Lake Erie car ferry business was gasping its final breath, another car ferry aligned with an Ashtabula County port would sink. But that is an Odd Tale for another day.

JEFFERSON [ndash] David Wayne Young, 60, passed away March 22, 2020 at Jefferson Healthcare Center. He was the loving father of Ozzy and Ian Young. In honor of his wishes no formal public services will be held.

ASHTABULA [ndash] US Army Veteran, Daniel Dufour, 67, passed away 3/25/2020 at the Cleveland-VA Hospital . He was the loving and devoted husband of Denise Dufour and step-father of Jon Ferguson and Megan Abrams. Online obituary at www.czupfuneral.com