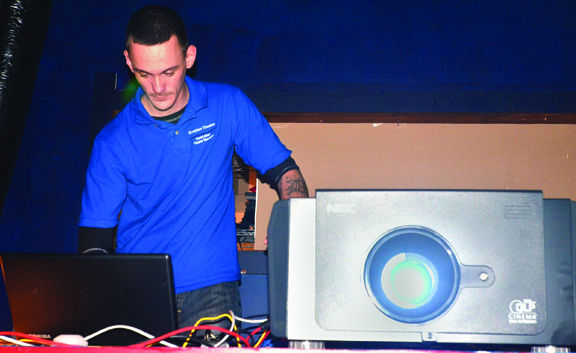 Andover Showplace general manager David Allen schedules the Tuesday showing of "Paddington," to be played with the theater's new digital projector, seen on the right. 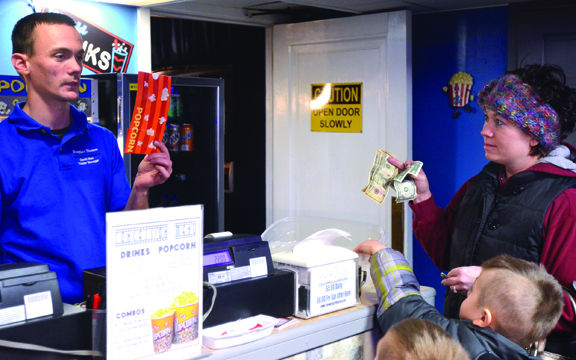 Andover Showplace general manager David Allen (left) explains the theater's weekly special "Tub-O-Tuesday" to guests before a Tuesday showing of "Paddington." Moviegoers can bring their own containers to the theater and get $2 popcorn refills. 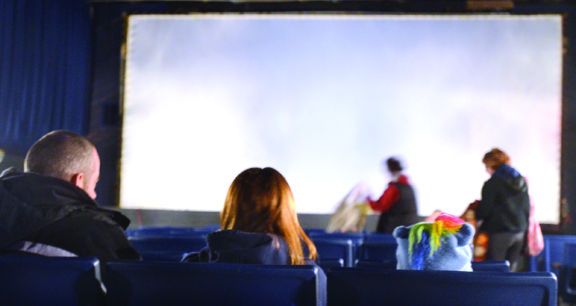 (From right) Jaylen Dull, Heather Steen and Bryan Butte settle into their seats at the Andover Showplace for a Tuesday showing of "Paddington" on the theater's new 30-foot silver screen.

Andover Showplace general manager David Allen schedules the Tuesday showing of "Paddington," to be played with the theater's new digital projector, seen on the right.

Andover Showplace general manager David Allen (left) explains the theater's weekly special "Tub-O-Tuesday" to guests before a Tuesday showing of "Paddington." Moviegoers can bring their own containers to the theater and get $2 popcorn refills.

(From right) Jaylen Dull, Heather Steen and Bryan Butte settle into their seats at the Andover Showplace for a Tuesday showing of "Paddington" on the theater's new 30-foot silver screen.

ANDOVER — The cornerstone of the Andover Showplace betrays its age. The theater was built in 1916 — the Vaudeville era — and, for generations, it brought musicians and other stage acts to the Andover Public Square.

“I’ve lived here all my life,” said David Allen, general manager of the Showplace, which is now primarily a movie theater. “My grandparents and my parents all used to come here way back.”

Several modern upgrades made within roughly the last year, however, have brought the Showplace up to 21st century standards, and will help it continue to entertain generations to come.

The Showplace closed for a month at the start of the year to remodel parts of the nearly century-old building, and enhance the viewing experience. It reopened at the end of January with a new 30-foot silver screen that’s about four times bigger than the white drop screen that was atop the Showplace stage, Allen said.

“The picture’s brighter, clearer — you actually get a better picture on a silver screen than you would a flat, white screen,” he said.

A new 5.1-channel DTS digital surround sound system was also installed. The screen and the sound system complement the new digital projector the theater acquired in 2013 and unveiled the following January. It was an expensive — some digital projectors can reach six digits — but necessary upgrade, Allen said, as movies are no longer being shot on 35-millimeter film, which was the standard until the digital age.

“In order to survive as a movie theater, that’s what had to be done, because 35-millimeter film is extinct,” he said.

The theater relied on good, old-fashioned stage shows and community outreach to drum up the money, Allen said, with fundraising events in-house — the 2013 “Save the Showplace” fundraiser — and at the Pymatuning Lake Festival. Owner Justin Dlugokecki hired Allen, a stage magician in his spare time, after Allen helped raise money with his stage act for “Save the Showplace.”

Although the new screen completely covers the Showplace stage, it used to feature live music, Elvis impersonators, comedians and magicians — “more than just movies” was the slogan Allen coined.

Even with the new additions, ticket prices for the Friday and Saturday showings have stuck to $5 — $6 after 6 p.m. — and some concession prices have dropped, making the theater’s new brand “an affordable night out,” Allen said.

Aside from swapping out movies more often — something smaller, privately owned theaters usually can’t afford to do — Allen said the theater is finding new ways to draw in crowds, such as streaming WWE events in high definition. WWE’s “Fastlane” event is showing tonight, with free admission and accepted donations toward the theater. Last April’s “Wrestlemania” showing drew around 150 people to the roughly 200-capacity space.

“Watching it on that large of a screen is so much better than watching it on your little 19- or 24-inch flat screen TV at home,” said Allen, a professional wrestling enthusiast. “With the surround sound, it feels like you’re actually at the event.”

The concession stand remains open throughout the event, he said, leading to multiple bursts of lobby traffic throughout the night, which greatly helps the theater’s overhead.

On Tuesdays, the theater’s “Tub-O-Tuesday” special allows guests to bring in their own popcorn bowls from home for one 20-ounce fill-up for $1. When the promotion started, attendance would spike on Tuesdays rather than weekends, Allen said.

Last fall, natural gas heat was added to the building. The four old heating oil furnaces would require multiple refills throughout the night and cost hundreds to heat the space from month to month, Allen said. The remodeled lobby, bathrooms and concession area were also finished before the reopening, Allen said. And there’s more updates in store.

“As soon as the weather breaks, we’re going to do some work outside as far as revamping the marquee,” he said. “We’ll probably end up painting the building just to give it a fresh, new look.”

The projection booth will soon be walled off, he said, and a portable stage will likely be added, so live entertainment can return to the theater schedule.

“We had the attitude of ‘go big or go home,’ ” Allen said of the recent upgrades. “We just wanted to give the moviegoer an ultimate experience for a low price, right here in Andover.”

Tonight’s showing is “The SpongeBob Movie: Sponge Out of Water” at 3 p.m. and 5 p.m. The WWE “Fastlane” stream begins at 7 p.m.