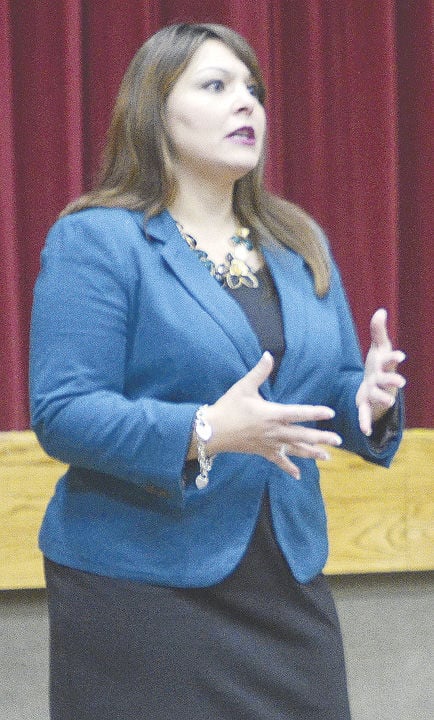 An auditorium of Pymatuning Valley eighth-graders listen to State Sen. Capri Cafaro talk about modern issues facing teens during a visit to the high school Thursday.

An auditorium of Pymatuning Valley eighth-graders listen to State Sen. Capri Cafaro talk about modern issues facing teens during a visit to the high school Thursday.

State Sen. Capri Cafaro, D-Hubbard, took time away from Columbus to visit Pymatuning Valley High School Thursday afternoon on an invitation from faculty, to speak for about an hour to an audience of eighth-graders.

Cafaro was asked to give the tweens some straight talk about many aspects of the world they’re growing into — bullying; dangers to digital privacy; the increasingly competitive and technologically demanding workforce; and the importance of responsibility and civic stewardship to the world they’ll inherit.

After a broad lecture, many students were eager to ask Cafaro about topical issues.

“These eighth-graders are paying attention to the world around them, which is a good sign that they’re engaged and that they care about their community.”

“This too shall pass,” she said to those who may be struggling with a hostile learning environment.

She cautioned students about becoming too connected in today’s always-on, always-listening world.

“The stuff on the Internet never, ever goes away,” she said. “Everybody from schools to employers are going to look and see what you have posted on the Internet.

“Be very, very cautious about how you use the Internet. ... When thinking about your future and you’re using this kind of technology, you’ve got to remember there are consequences.”

One question she fielded twice before and during her presentation was about standardized testing, like the Partnership for Assessment of Readiness for College and Careers test. State legislation adopted just weeks ago now allows students to be exempt from some “high stakes” tests, with no penalty to the student or the school.

Further modifications, which haven’t been adopted yet, also moderate the amount of time spent testing each year. But these adaptations are only a one-year fix until the state General Assembly and Department of Education can reach a permanent solution.

As someone who said she suffered from test anxiety through her academic career, Cafaro told the students she’s “not a huge fan” of PARCC testing, though she added a barometer for school performance and student growth is needed.

“Right now, we’re teaching to the test,” she said. “There needs to be a balance.”

Cafaro said this kind of local outreach is integral to keeping young people involved and interested in the democratic process.

“I think that it’s important, first of all, for young people to realize their voices are heard by government,” she said. “I like the opportunity to engage young people and let them know that I have been there, I understand, and that there are people that are looking out for their future.”