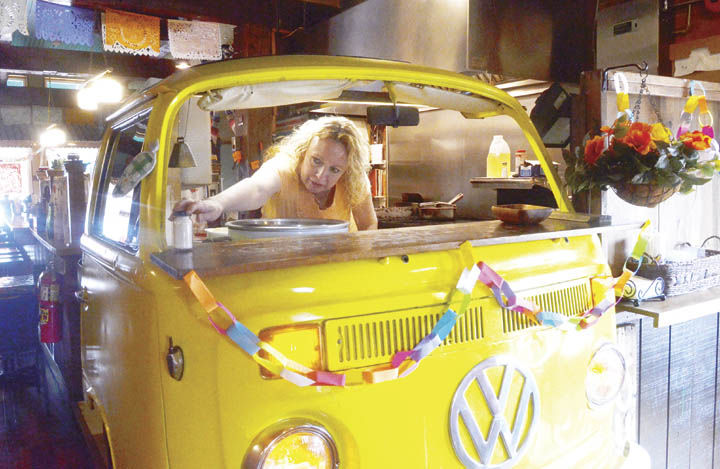 DEBBIE SISTEK, owner of Luisa's Mexican Grill inn Geneva, preps a cooking area that is created from the front of VW vehicle. 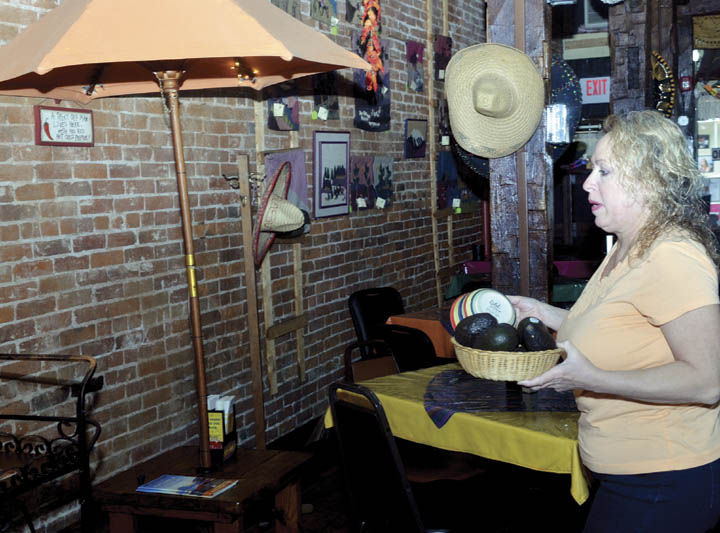 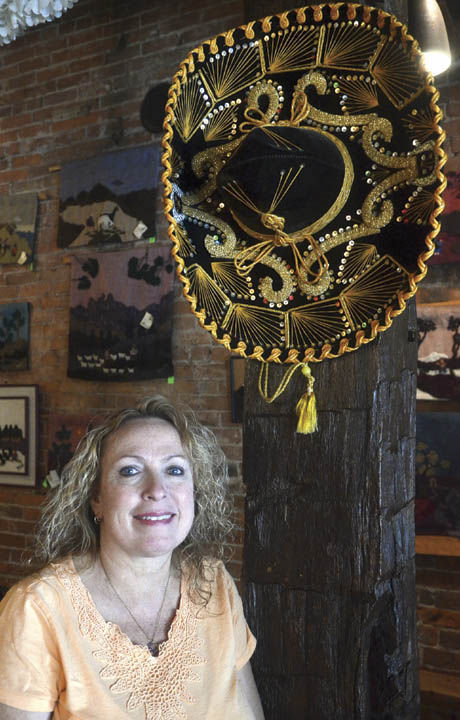 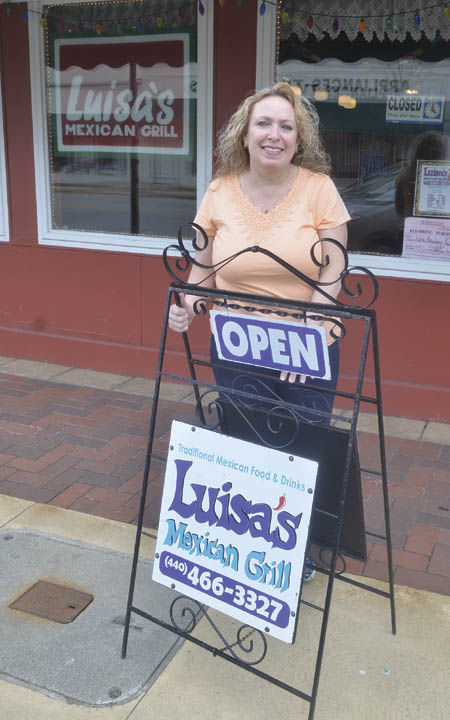 DEBBIE SISTEK, owner of Luisa's Mexican Grill inn Geneva, preps a cooking area that is created from the front of VW vehicle.

GENEVA — Debbie Sistek’s long-time dream of opening a Mexican restaurant in Geneva first got off the ground in 2000 when she bought a 1969 Tag-a-Long camping trailer for $85 and converted it into a mobile taco wagon.

She drove the taco wagon to street corners and soccer games in Geneva, Madison, Perry, Painesville and Ashtabula and sold Mexican food wherever she could. Having a Mexican restaurant was a dream she realized after years of struggle, but in the end she says it was all worth it.

A 1980 Harbor High School graduate and Saybrook native, by 1984 Sistek had moved to Geneva, which has a sizable Hispanic population. But it wasn’t until she took a trip south that her love and dream took root.

“I got my first taste of real Mexican food on a trip to see a friend in San Antonio, Texas in the early 1980s,” Sistek said. “After that, I was hooked. I came back to Ohio craving Mexican food.”

In 1992, she co-owned Captain Hook’s Cantina (now Slyder’s) on North Ridge West, a sports bar with a mostly Hispanic clientele. She immersed herself in Mexican, Puerto Rican, Honduran and other different Hispanic cultures living in the Geneva area and learned more about their food.

“In 1996, I purchased the Wine Barrel on North Broadway,” she said. “All I could sell was beverages and snacks there, though. My father helped me a lot. He renovated that building over a nine-year period, and with his woodworking skills we redid everything from the ceiling to the floor.”

Since then, along with her husband Alfonso Santos, she has not only brought authentic Mexican food to Geneva at Luisa’s Mexican Grill, but has promoted city and area events on a regular basis.

In 2000, Sistek converted the Tag-a-Long trailer into a food truck and called it Taqueria Uno. Her first regular outing was the Fiesta Latina in Madison, followed by Country Days in Austinburg, but she later sold food everywhere in Ashtabula and Lake counties.

“I had to learn how to hitch a trailer and drive and back it up,” she said. “But when summer ended I was out of sales income and still short of my goal of having a real Mexican restaurant.”

Most of this time Sistek often worked two or three other jobs just to stay ahead and rented her home while living in the basement of her business with her two cats. She inched her way closer to her dream of having an authentic Mexican restaurant one month at a time.

“Finally, in 2004, the only thing standing in my way of opening Luisa’s Mexican Grill was $5,000 needed to bring plumbing up to code,” she said. “A true friend came through and wrote me a check, which I paid back over three years.”

Sistek said that left her in good shape — except for the fact she was pregnant and still working for temp agencies to fill in needed cash flow. In March 2005, her daughter, Luisa, was born and in September, during the Grape Jamboree, she opened Luisa’s Mexican Grill at 41 N. Broadway. Her husband Alfonso, an electrical engineer, was in Mexico at the time.

“At first I did all the cooking, waitressing and bartending,” she said. “I was the only employee. Sometimes, if there were a lot of people waiting for food, I couldn’t keep up. I realized I’d created a monster and had to get it under control quickly.”

She said Alfonso returned in time to help, but he also was working at Lincoln Electric on Cleveland’s East side and there was only one car, so transportation and logistics were difficult. Luisa’s Mexican Grill hadn’t found its niche yet, so there were days when she would work 12 hours and make only $30 in food sales.

Those days of being unnoticed and overworked lasted just a few years. By 2009 word of mouth had traveled beyond Geneva and now supports a strong client base.

“Business just kept growing,” she said. “Some area chefs made it a regular stop and that increased the word of mouth. After all those years our dedication to authentic Mexican food paid off.”

Making a name with ‘real’ food

Sistek said she enjoys educating Americans on real Mexican food. She said there are three varieties of Mexican food currently in restaurants, and only one is traditional and authentic.

“That’s Mexican cuisine, which is regional and where each state in Mexico has its favorite foods,” she said. “Then there’s Tex/Mex, which comes from the ranches of Arizona and Texas. There’s also American Mexican, which uses Mexican foods modified to American tastes. We serve Tex/Mex and real traditional Mexican cuisine, and not much of what’s called American Mexican. We do, however, make many things to order.”

She said authenticity was one of Luisa’s major achievements.

“We must be doing something right,” she said. “We were rated as one of the best Mexican Restaurants in Ohio by Urban Spoon, a nationwide restaurant rating website. I didn’t know about it until I saw it on urbanspoon.com.”

Part of that authenticity has to do with the ingredients they use.

“We use only the best, real Mexican ingredients,” said Alfonso Santos. “If we have to drive to Painesville or Cleveland to get it, or order it specially from Chicago, we’ll do that because we want the food to be authentic.”

Luisa’s Mexican Grill currently seats 50 people in the dining room and within the next few months there will be a wine, tequila and appetizers bar upstairs with seating for 50 more and a patio outside with seating for about 38. The restaurant employs seven part-time and two full-time employees. Luisa’s leases it’s parking lot from the city of Geneva.

Sistek does all the cooking and Santos runs the restaurant.

“Much of the interior decor comes from Mexico,” Sistek said. “It’s a pleasant visual experience as well as a great food experience. We try to make it as enjoyable and as much fun as possible for customers.”

“If customers are satisfied, then I’m satisfied,” Santos said. “We have to make sure everything goes together well, the food, service and atmosphere.”

Along with making a name for herself in Mexican cuisine, Sistek is active in promoting Geneva and the local area.

“We feel blessed to have been so well received in Geneva,” she said. “It’s a great community. I devote a lot time to promoting it. It’s a way of giving back.”

Sarah Bals, director of Connnect 534, said Sistek has supported every community-oriented event in town since she first met her two years ago.

“My first impression was she’s very involved in the community,” Bals said. “She sponsored Easter Fest in Geneva and is very active in downtown development. She’s outgoing, friendly and sincere. Everyone in the local business community is happy she’s done so well.”

The events and organizations Luisa’s Mexican Grill supports include the Carson and Barnes Circus, Connect 534 events, the Ashtabula County Animal Protective League, the Geneva Grape Jamboree, the Harpersfield Beef Roast, Geneva Area City Schools and many others, she said.

“We do a lot with Connect 534, which links tourists with destinations along State Route 534 between Harpersfield and Geneva-on-the-Lake,” Sistek said. “There are seasonal events like Easter Fest and Light the Town on Christmas with luminaria candles.”

Sistek is a board member and volunteer of the Ashtabula Animal Protective League, a member of the Geneva Business Association, a graduate of Leadership Ashtabula County, a partner in D & V Promotions of Geneva and a volunteer on the board at St. John’s Lutheran Church.

“Luisa’s has hosted the Geneva Business Women, the Rotary Club, the Geneva City Christmas party, parties for Perry Nuclear retirees, Geneva High School Retired Alumni, two marriage proposals, a Meet the Candidates Night and a Sherrod Brown fundraiser featuring Pulitzer Prize winner Connie Schultz,” she said. “We’re happy to be one of the reasons people are coming to Geneva to enjoy themselves.”